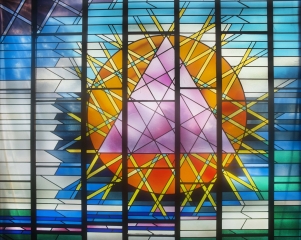 In a recent RE lesson, we analysed different pieces of artwork showing core concepts from Christianity.  In particular, we were looking for representations of; incarnation, sacrifice, resurrection, salvation and hope.  We found that good religious art has many connections, not just one, and that different people appreciate and see different things within the same picture or sculpture.

Libby chose to write about a piece of stained glass which is installed in the church of Saint Martin of Tours in Basildon.  The work is by the artist Joseph Nuttgens and is entitled, 'The Explosion of The Love of God'.

Libby wrote, "This stained glass window, created by Joseph Nuttgens, can be found in a church in England.  It is classed as a modern piece of artwork as it was made in 1990.  I believe it shows hope, as it looks like the sun in the sky, like a symbol of Heaven.  Another concept I see is sacrifice, as it looks like bars in the foreground, representing Jesus being held as a prisoner and later crucified.  Finally, I see incarnation, as there is a triangle in the middle which I think is a symbol of The Holy Trinity". 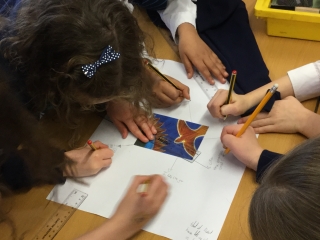 This term's Big Question is, 'When Jesus left, what was the impact of Pentecost?'

Christians believe that after Jesus ascended into Heaven following his resurrection, he sent the Holy Spirit at Pentecost to help Christians to live lives reflecting the love of God.  Pentecost is celebrated as the beginning of the Church.

Many artists have used their work to reflect their understanding of this important event.  We looked at work by six different artists, examining their use of symbollic imagery, asking questions, commenting on the Christian beliefs shown and giving our opinion on what we saw. 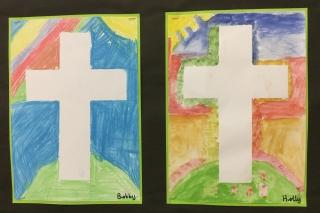 Christians see Holy Week as the culmination of Jesus' earthly life.  Year 3 have been learning about the various events of Holy Week during their recent Salvation topic, including Jesus' death and resurrection.  They have learned how Christians remember and celebrate Jesus' last week, including looking at the different crosses used in churches during that time, such as Palm crosses, Friday crosses and Easter Sunday crosses.

As a reflection on this Salvation topic, the children produced their own Christian crosses using a tape resist technique and a medium of their choice, such as chalks or watercolours.  The children understand that their empty cross reminds Christians of the resurrection of Jesus Christ; a concept at the very heart of the Christian faith. 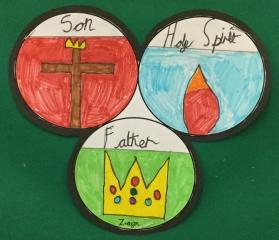 During our topic on Incarnation, we have been trying to answer the question, 'What is The Trinity?'  We have learned that for Christians, understanding God is challenging.  People spend their whole lives trying to understand more and more about God.  The concept of The Holy Trinity is perhaps one of the most mysterious concepts of all!

We read the story of Jesus' baptism from the Gospel of Matthew, identifying all three elements of The Trinity; Father, Son and Holy Spirit.  We then looked at the impact of this story in how Christians celebrate baptism in their own lives, both as infants and as adults.

During this topic, we learned how Christians try to explain The Trinity in many ways, including through symbols, poetry and artwork, producing some of our own artwork to express our growing understanding of The Trinity. 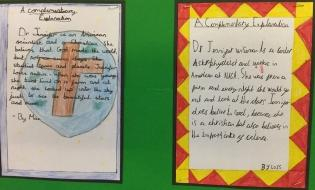 In Year 5, we have been learning that there is much debate around the relationship between the Christian account of creation in Genesis and contemporary scientific accounts.  We looked at the Genesis account in the Bible and learned that not all Christians interpret it in the same way.  For example, some may take it literally, whilst others consider it to be poetical, explaining why the world was created and by whom, but not necessarily how.

We then learned about core scientific theories such as The Big Bang Theory and Evolution and asked whether Christians could believe in both Science and their religion.  Many of us were interested in the views of the NASA astrophysicist, Dr Jennifer Wiseman, who believes in both Christianity and Science and holds a complementary view.

Having reflected on the evidence, we considered our own opinions too.  We produced some explanations of creation based on what we learned during this topic. 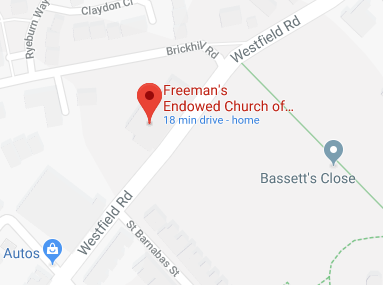